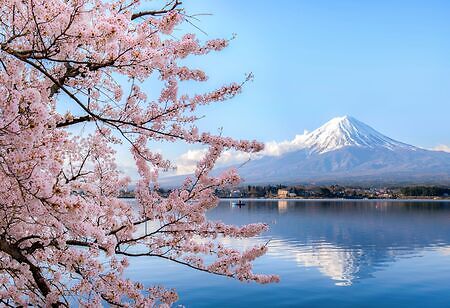 Travel provides a fantastic opportunity to get into new things. Yes, we get knowledge from travel guides, we will be able to visualize what we are reading about but nothing compares to actually feeling the sun on your face or the snow in our hair. When we experience standing on the soil, looking at the things we read about, the experience is exhilarating and irreplaceable. We all want to have a superfluous vacation where the sky's the limit and we want to bring everything home with us from our vacation.  If someone is planning to tour abroad, Japan is the most preferable country. It is called the country of Islands. Here are the most attractive iconic places of Japan:

Tokyo is a city that reflects the colors of Japan. It is abundant in culture and world-class attractions. It has got a great culinary scene that makes it one of the  best places to visit in Japan. Tokyo Disneyland is a great spot to let visitors' inner child out to play. It was established in 1983 and was the very first Disneyland that opened up anywhere in the world outside of the United States. It is a massive theme park that draws inspiration from the movies produced by Walt Disney Studios. There are seven themed lands here, based on the Magic Kingdom in Florida and Disneyland in California.  The other best scene that visitors can enjoy in Tokyo is The Tokyo Skytree which is a gigantic broadcasting and observation tower in Tokyo. It is considered as the second largest structure in the world after Burj Khalifa Tower in Dubai. It has a recorded height of 2,080 feet and 450 floors above ground level, it is also the tallest tower in the world and is the main television and radio broadcasting site for the entire Kanto region. The Tokyo Skytree was built especially to make sure that the signals being transmitted to and from this tower are not impeded by the nearby skyscrapers, which had led to the decommissioning of the earlier television and radio broadcasting tower.

Kyoto is called the city of shrines, gardens & palaces. If we look into all the other major Japanese destinations, Kyoto is a sacred city. It is one of the best places to visit in Japan in spring irrespective of whether you are holidaying with your family or your partner. The iconic temples, shrines, palaces, gardens, and the bamboo forests are a treat to the eyes, and one cannot afford to miss it on the first trip. It is an ancient district having traditional and classic Japan. It is the reflection of cherry blossoms, geishas, temples, traditional ryokan inns and masters of tea ceremonies. After an energetic and frenzied time in Tokyo; we transitioned to a more calming vibe. It is totally different from Tokyo and visitors can sense two completely varied rhythms of life. Tokyo is electric and buzzing whereas Kyoto is serene and laid back. As it is bound with the temples everywhere, it reminds of the country’s rich history. These places are tranquil and historic with well-preserved heritage. This is not to say it’s all about tradition, as Kyoto also effortlessly embraces the modern side of Japan with its contemporary design and high-rise buildings.

The sacred shrine receives thousands of visitors wishing for success, good luck, and good health. Known for its tunnel of meditative vermilion-lacquered structures made of wood, the torii gates meander through the hillside forest up to the Inari Mount. Dotted throughout the shrine are Shinto gods which come in the form of fox statues called Kitsune, deities that represent rice, agriculture, and sake (Japanese rice wine).

The city of Nara, the prefectural capitals, is situated in the hilly northeastern edge of the Nara Basin which is 25 miles (40 km) east of Osaka.  It retains the atmosphere of ancient Japan. The city is most noted for the many ancient Japanese Buddhist buildings and artifacts in and around the city, including the Seven Great (and many ancient but lesser) Temples of Nara. And the full city is bounded with the temples.

Its artwork and artifacts include jewels, musical instruments, masks, paintings, sculpture, samples of calligraphy, and household items. The Grand Shrine of Kasuga is one of Japan's ancient monuments.

The Hōryū Temple which is located in Ikaruga, southwest of the city, is Japan’s oldest surviving temple, and its compound abounds with priceless paintings and carvings and some of the most ancient wooden buildings in the world. These ancient remnants of early Japanese civilization form the basis of Nara’s tourism industry, which has wide appeal to foreigners as well as Japanese. Nara’s status as a national cultural monument is reflected in a Japanese proverb: See Nara and die; i.e., one can die content if one has seen Nara. The historic monuments at Nara were designated a UNESCO World Heritage site in 1998.

The Japanese icon of Mount Fuji is not only famous as the highest mountain, but also a perfectly formed volcano. Although its last eruption was in 1707, it’s still active. The potential for a reawakening of this sleeping giant merely adds to its wonder. If the visitors are in Tokyo or Yokohama they can see the mountain  on a clear day. Take the bullet train, a marvel in itself, which runs past the mountain between Tokyo and Osaka. From July to mid-September, several well-maintained trails going up the mountainside are open, with some even paved part of the way and stations break up the climb on different sides of the mountain. At the Fifth Station marking, the climb becomes more strenuous. Four trails connect the Fifth Stations on multiple sides of the mountain with other stations ranging in altitude from about 4,590 to 7,875 feet (1,400 to 2,400 meters). While these areas are frequently closed to cars, visitors can access them by bus.  Visitors likely won’t be alone during the open season as they hike to the stations or even to the summit at an altitude of 12,388 feet (3,776 meters). Many Japanese consider Mount Fuji to be a holy volcano, while others simply desire scaling this beautiful mountain. Make reservations to stay at mountainside huts for overnight treks. Visitor’s need to share the huts during the tourist season. Some huts are also available as resting spots and are equipped with toilets. Camping is permitted in designated areas. Upon reaching the summit, walk around the volcano’s crater in about one  hour. At the base of the mountain is the Fuji Five Lakes region, with stunning volcano views. A lake resort area called Fujigoko offers year-round activities. Immerse yourself in a hot spring, take time to visit museums, iconic gardens and Shinto shrines or have a day of fun at the popular Fuji-Q Highland amusement park.

Yakushima is an island situated on the warm Kuroshio. At present with its warm and moist air which encounters the high mountains of Yakushima, flows up the 1,000 to 2,000 meters mountains, cools, and forms rain clouds. People say that it rains 35 days a month in Yakushima. As it gets the highest rain it moistens the forest, creates countless streams and rivers, and finally returns to the sea; starting the cycle again. The heritage of  Yakushima, diverse ecosystem, mystical forest, and village lifestyles exist due to this water cycle. Average of  90 percent of Yakushima  is mountainous, many of which are steep and treacherous and covered with an ancient forest. Yakushima is the combination of its terrain, cyclic water source, and mystical forest. An island that is only 30 kilometers across is home to ancient cedar trees, Yakusugi, over 1,000 years old and 78 species of endemic plants that can only be found on Yakushima. Through its rich and abundant sea brought about by the Kuroshio Current, boasting the largest fish species in Japan and having one of the world's leading sea turtle spawning grounds, and a diverse ecosystem; Yakushima is like a microcosm of the earth.