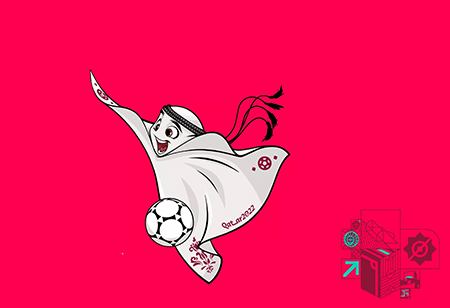 The grand kick-off of FIFA World Cup Qatar 2022 is just 30 days away. La’eeb, the official Mascot of the FIFA world cup 2022, is ready to welcome the world to Qatar. The opening ceremony will take place on November 20 at the 60,000-seat Al Bayt Stadium in Al Khor, north of the capital of Doha. Not just for Qatar, but this world cup is much more than a football tournament for the whole Arabian Peninsula.

The Qatar world cup symbolizes the once oil-based economies in the region turning a corner. The diversification of the economy is now a massive aspect of the Arabian dream. The GCC countries looking forward to becoming the sports hosts of the world & attracting travelers from around the globe is a deliberate attempt toward realizing this new vision.

Qatar world cup 2022 is just the tip of the iceberg. The cities like Dubai have already proven their prowess and capabilities even to conduct multiple tournaments simultaneously. During the six months of the Expo 2020 (October 2021-March 2022), Dubai hosted more than 30 international sports events, including the men’s and women’s Rugby World Cup qualifiers, cricket’s Twenty20 World Cup, and the European Tour’s ‘Race to Dubai’ finale, the DP World Tour Championship.

GCC is Becoming the New Global Sports Hub
UAE has several other iconic sports events in the pipeline, including pre-season NBA games, Formula One, and UFC, to attract international tourists. The Department of Culture and Tourism – Abu Dhabi (DCT – Abu Dhabi) has signed a multi-year strategic partnership with the NBA. The two NBA Abu Dhabi Games in October will offer the city’s residents and fans the opportunity to see the world’s top basketball superstars facing off live for the first time in the region. This will combine with interactive, immersive fan events throughout the city. Additionally, the All India Football Federation (AIFF) is planning to hold the knock-out stages of the Santosh Trophy National Championships in Saudi Arabia early next year.

The change is happening, and it is happening fast. But every revolution requires a face—a leader capable enough to point fingers in both directions—against the disparagers and one toward the right way to progress and prosper. Saudi Arabia’s powerful Crown Prince Mohammed bin Salman (MBS) has emerged as an ambassador of this ongoing change in the GCC region. He was recently appointed as the prime minister of the kingdom by a royal decree. Crown Prince MBS has changed Saudi Arabia radically since rising to power in 2017, leading efforts to diversify the economy from its dependence on oil.

Saudi crown prince has now launched the National Industrial Strategy, which aims to increase the industrial exports value to 557 billion riyals by 2030 ($148.34 billion), according to the country’s state news agency, SPA. The agency added that this new strategy would also increase the total additional investments in the sector to 1.3 trillion riyals ($346.21 billion).

In other words, NEOM will be a destination, a home for people who dream big and want to be part of building a new model for sustainable living, working, and prospering.

“Through the National Industrial strategy and in partnership with the private sector, the kingdom will become a leading industrial powerhouse that contributes to securing global supply chains and exports high tech products to the world,” the agency quoted Prince Mohammed as saying. It is widely regarded as another prominent step toward his Saudi Vision 2030, which is a strategic framework to reduce Saudi Arabia’s dependence on oil, diversify its economy, and develop public service sectors such as health, education, infrastructure, recreation, and tourism.

In fact, MBS has been in the limelight quite a lot for his unique investments and pet projects, one of the recent ones being Saudi Arabia’s sovereign wealth fund, a.k.a Public Investment Fund’s acquisition of the English Premier League club, Newcastle United FC. Football fans worldwide are quite optimistic about Newcastle United FC following the footpath of Manchester City FC, which is owned by Mansour bin Zayed bin Sultan Al Nahyan, the Deputy Prime Minister of the UAE. The Saudi Arabian Public Investment Fund purchased Newcastle United for $409 million. MBS’s biggest pet project, however, is not in sports. It’s Neom, the iconic tech city shaping up in one of the Arabian deserts, which he expects to be the crown of Saudi Vision 2030.

Neom: The Epitome of Change
Remember the sky cities in all those Sci-Fi movies? Well, they might not be an impossible fantasy after all. Saudi Arabia is building something closer to them technology-paradises in one of the country’s vast ranges of deserts. MBS is in the early stages of one of the largest and most difficult construction projects in history, which involves turning an expanse of the desert the size of Belgium into a high-tech city-region called Neom.

MBS is widely seen as an advocate of radical changes in the Arabian Peninsula—from his controversial political decisions, including allowing women to decide whether to wear robes and face veils, to his futuristic economic vision that now helps KSA see beyond the oil realm. Neom is his attempt to do something that’s never been done before, and it’s coming at a time when the world needs fresh thinking and new solutions. Having earmarked a budget of $500 billion, MBS is determined to make Neom a showpiece that will transform Saudi Arabia’s economy and serve as a testbed for technologies that could revolutionize daily life.

Neom is taking shape in Saudi Arabia’s far northwest, stretching from the sun-scorched Red Sea coast into craggy mountain badlands. We are talking about the epitome of desserts with summer temperatures over 100F and almost no fresh water. But MBS has no doubt in his mind that it will soon be home to millions of people who’ll live amidst a serene environment, relying on desalination plants and a fully renewable electric grid. In other words, NEOM will be a destination, a home for people who dream big and want to be part of building a new model for sustainable living, working, and prospering.

It’s quite lucid that the Arabian Peninsula is undergoing radical transformation, and Saudi Arabia and MBS are leading that change.

A Fight Back from Arabian Peninsula