Indonesia's Tempe, Cassava Could be the Answer to the Global Staple Food Insecurity Crisis 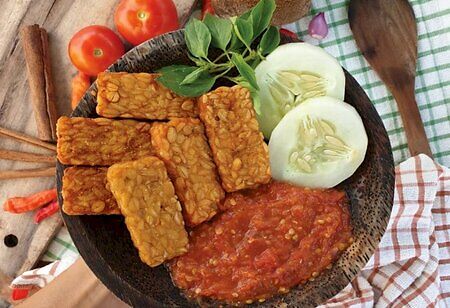 Way before plant-based burgers among others became a vegan’s cuisine popularity, alternative meat were originally prepared from soybeans. This of course involved the pan-Asian tofu and Indonesian tempeh, a plant-based food made from fermented soybeans. Tempeh is a staple food in Indonesia, which is fried and served with sauces. At the Global Food Security Forum, Amadeus Driando Ahnan-Winarno, Co-Founder, Indonesian Tempe Movement said that both tempeh and cassava could tackle the global staple food insecurity crisis.

Ethnic food is becoming increasingly cherished by its people and visitors. Global trade, no barrier movement of different ethnicities and tourism are influencing and increasing awareness about ethnic. Consuming food that originates from one’s homeland, does beyond satisfying basic needs. It makes one enjoy the food as a culture and emphasizes the identity of a nation. It is done through the way people prepare the ingredients, the cooking process and how it’s consumed. Fermented ethnic food is richly associated with that by mirroring the culture and tradition of people.

In East-Asia or South-East Asia fermented food has significantly affected dietary life in many ways, especially soy-bean products. Since people believe that consuming fermented food presents chronic disease and improves well-being. Soy bean products, in particular, almost in every dish of the Asian cuisine. As they are packed with protein and highly rich in phytonutrients namely isoflavones.

By fermenting soybean products, the bioavailability of nutrients are improved and anti-nutrients are reduced.

As Amadeus says, Tempe is one among many foods having the R&D done by ancestors years ago, who ardently wait for generations to feed on it, and feed the planet in the most sustainable manner they can.

Tempe originated from the Central Java Island of Indonesia, which firstly appeared in the Javanese literature named Serat Centhini dating back to 1815. The literature speaks about the fermentation process of tempe, which is down below as follows.

Steps Tempe Undergoes Before Making it into the Pan

To become a relishing edible, the tempe must undergo several processes. These steps involve soaking, dehulling, washing, boiling, draining, cooling, inoculating with starter, and incubating at room temperature (30 ± 2 °C). It is during the incubation stage, the soybean begins to ferment, forming into a compact cake like form, covered and bound together by a white mold called mycelia.

This process causes chemical and biochemical changes in the soybean. While soaking, the entire hydration, lactic acid fermentation ensues, followed by the reduction of pH of the soaked water dropping down at 5.0. This process hinders the growth of microorganisms and supports the growth of tempe starters. Additionally, the growth of Klebsiella pneumoniae starts producing vitamin B12. Soaking also softens the texture of the soybean and makes it easier for epidermis removal.

Then soybeans are incubated, enabling mold fermentation to cause the hydrolysis of lipid protein. Here the fatty and amino acids are increased, while the carbohydrate content is decreased. Then tempe begins to form flavors, antioxidant constituents and improves the bioavailability of minerals and isoflavones.

The hands behind the manufacturing are mostly small scale producers, who prepare and have been passing down the traditional way of preparing tempe. However, the preparation process may vary depending on the region.

The inoculated soybean is placed inside a banana leaf or bag with perforations, and it is then incubated for 48 hours at 30 2 °C. The Rhizopus spp. sporangiospores will distribute and develop into a thick, white mycelium due to the restricted airflow in the packing, which binds the soybean to form a compact cake.

Buddhists and other vegetarians relied on tempeh, which turned difficult-to-digest yellow soybeans into a tasty, meaty cake that also provided incredibly nourishing sustenance during times of famine.

Since it is made from whole grains or legumes, it preserves a lot of fiber and minerals. Additionally, it is significantly easier to digest due to fermentation. This makes it easier for many nutrients and antioxidants to be absorbed.

Approximately four ounces of tempeh contain 167 calories, 8.5 grams of fiber, and 19 grams of protein, according to the USDA Agricultural Research Service. With fewer calories and more fiber, it has nearly the same amount of protein as a serving of salmon.

Traditional tempeh is gluten-free, but since many commercial producers employ other grains that can contain gluten, it's a good idea to read labels.

Earlier, the people of Indonesia did not consider tempe to be equal grounds with other protein foods such as eggs, fish and meat. It was the change in mindset of the people that made tempe become a highly edible product, enjoyed by different socio-economic classes today. Tempe is cooked almost on a day-to-day basis, and is even prepared during festivals and other occasions. It is served at important social gathering events such as kenduri and selamatan in the rural areas of Central Java and Yogyakarta province.

Cassava, on the other hand, could be a better replacement for rice as Indonesia’s staple food, says Achmad Subagio, agricultural technology professor, University of Jember. According to the agri-tech professor, Cassava is highly efficient in photosynthesis, twice as efficient as Corn and other crops including wheat.

He further stated that there is not much land to cultivate rice for a population widely dependent on tonnes of carbohydrate. Besides, cultivating rice requires a lot of water, fertilizer and other materials.

But the Cassava grows quite well even on sub-optimal land says the agritech professor. Further, he is confident about changing the mindset of the people, who regard it as food of the economically backward, with the help of technology. Even in the upcoming years, the agritech professors hopes that the plant can be used for bioindustry development for producing monosodium glutamate, sorbitol and lecithin as it contains sugar.